The Odyssey radio drama series has helped kids learn & grow in their Christian faith over the course of the last five decades.  Read more below about how Adventures in Odyssey got started.

It began as an experiment.  In 1986 Dr. James Dobson of Focus on the Family wanted to produce a high-quality drama series for the radio.  He hoped that it would appeal to Christians looking for alternatives to Saturday morning cartoons or simply families in search of wholesome entertainment.  Steve Harris and Phil Lollar, the show’s creators, brainstormed what the series could be.  They decided that it should be set in a small town (called Odyssey) somewhere in the Midwest and hearken to the golden age of radio without sounding dated. In 1987, a 13-week test series was aired on Focus on the Family broadcast.  It was called Family Portraits and chronicled the lives and times of Odyssey residents – including John Whittaker and a special “soda shop and discovery emporium” called Whit’s End.

Audience response was so favorable that Focus went one step further and created the weekly radio program that would eventually be called Adventures in Odyssey. August 10, 1987 – Radio drama “Tilly” airs; it was based on the book by the then unknown author Frank Peretti.

March 18, 1989 – Whit unveils his greatest invention in “The Imagination Station.” August 5, 1991 – Adventures in Odyssey starts airing daily on stations around the country. October 1991 – Focus on the Family moves from Pomona, California, to Colorado Springs, Colorado. November 1997 – The Complete Guide to Adventures in Odyssey released. December 18, 1999 – “A Look Back celebrates a millennium of Adventures in Odyssey episodes. 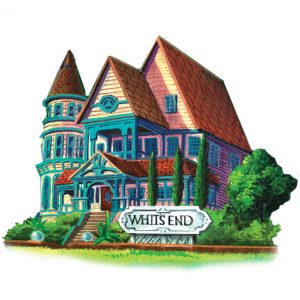 Fall 2004 – Adventures in Odyssey video games released.  (“The Treasure of the Incas” and “The Sword of the Spirit”)

April 2, 2005 – “A Most Intriguing Question” airs. Eugene returns to Odyssey with much fanfare. December 16, 2006 – The Washington family becomes foster parents to a girl named Kelly.  (“The Chosen One”) February 8, 2010 – An Adventures in Odyssey CD travels to outer space in the International Space Station with astronaut Terry Virts. March 6, 2010 – The first episode of the relaunch of Adventures in Odyssey airs.  (“The Inspiration Station”)

Summer 2010 – The first Imagination Station book, Voyage with the Vikings, is released.

Summer 2012 – The Get in the Show Contest finds a new voice for Adventures in Odyssey. Summer 2013 – Focus on the Family hosts the A.C.T.S. (A Call to Serve) contest, giving fans an opportunity to serve their communities and win a missions trip to Costa Rica and become an Adventure in Odyssey ambassador. Summer 2017 – Adventures in Odyssey holds the second “Get in the Show” contest, with the winner joining the cast on a cruise ship.

November 3, 2018 – After Olivia makes a bold promise to the drama club, Morrie Rydell decides to secretly test her integrity. (“The Good in People”)

November 13-17, 2017 – Adventures in Odyssey celebrates its 30th anniversary on the first-ever Focus on the Family cruise to the Bahamas. October 26, 2019 – Emily and Matthew are trapped inside an unfinished escape room in the basement of Whit’s End. (“A Sacrificial Escape”) February 25, 2020 – Adventures in Odyssey is Awarded, “Radio Program of the Year,” by the National Religious Broadcasters.